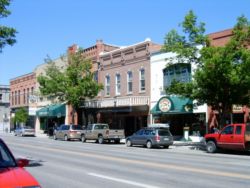 The City of Bozeman continues to grow in geographic size by annexing new land to accommodate population and business growth. In 2008, Bozeman was approximately 19.25 square miles in size.

Bozeman's economy is largely supported by agriculture with tourism, educational services, and the high tech industry being other key sectors. Bozeman is home to Montana State University with an enrollment of over 11,000 students. The unemployment rate in Gallatin County is 2.9 percent [3]. In 2000, the largest employment industry in Bozeman and Gallatin County was services, including education, followed by retail trade and construction. 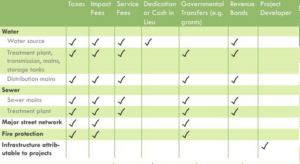 Bozeman has used general obligation (GO) bonds to finance capital facilities to meet growth demands. State statutes restrict Bozeman's use of GO bonds, which is limited by a debt ceiling based on a percentage of the City's tax base. Bozeman uses other financing tools such as Special Improvement Districts (SID) and development exactions to raise the necessary revenue for new infrastructure and services. In spite of this broad-based transportation funding system, as illustrated in Figure 1, additional funding tools were needed to better address the impacts of new growth. In 1996 the City Commission of Bozeman voted to establish impact fees to cover the additional fire, water, sewer, and transportation infrastructure and services needed for new development. Impact fees were viewed as the best mechanism to equitably balance cost burdens of new infrastructure and services for the growing community.

There are a number of factors that prompted Bozeman to consider and ultimately adopt impact fees: 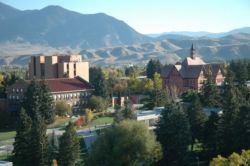 The cost of service was established by impact fee studies covering fire, water, sewer, and transportation infrastructure and services. The City Commission voted to assess an increasing portion of the costs established by the impact fee studies during a transition period. Bozeman assigns 80 percent of the calculated cost of service to new development. The other 20 percent of cost of service must be met through other funding means. In November of 1998, Initiative 19 was passed by the voters which raised the percentages collected to 90 percent for all fees [4]. This decision was opposed by the development community and a lawsuit was filed to challenge the impact fees. In 2005, the Montana state legislature enacted legislation that authorized the impact fee program and settled the court issue. 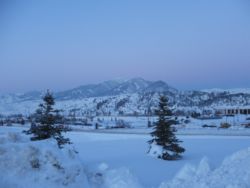 Bozeman initially enacted the impact fee program based on the City's general police power granted by the Montana State Constitution. In July 2001, Bozeman became a self-government powers municipality and readopted all of its ordinances, including impact fees. The legal basis for impact fees became explicit when the 2005 Legislature passed Senate Bill 185 which granted general authority to adopt impact fees and established certain standards for documentation and procedures in adopting an impact fee. These standards help to create an impact fee program that is transparent and holds the jurisdictions accountable for how the fees are collected and spent.

The law relating to impact fees in Montana Statute, Title 7, Chapter 6, Part 16 MCA, contains several restrictions on the use of impact fee funds. These restrictions are intended to ensure that impact fees charged are proportionate to the actual impacts of new development and that the fees are then used to off-set those impacts as required by law. For example funds from transportation impact fees cannot be used for operation, maintenance, repair, alteration, or replacement of transportation facilities or equipment (such as buses). However transportation impact fees may be used for a wide variety of capital investments including bicycle or pedestrian facilities that are built in conjunction with and included in a capacity-adding transportation system facility.

Bozeman ensures compliance with these restrictions through a four step process that examines need for and use of funds throughout the entire impact fee process. 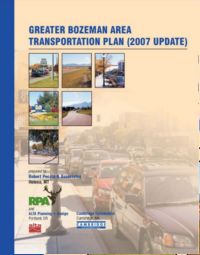 The City of Bozeman and Gallatin County, in conjunction with the Montana Department of Transportation, completed a major revision to the Greater Bozeman Area Transportation Plan in 2007 (see Figure 2). The updated plan is multimodal and examined all forms of ground transportation, including cars, trucks, buses, biking, and walking. The plan identifies major improvement projects that must be implemented in order to meet the anticipated traffic demands for the year 2030 so the transportation system will continue to function effectively.

The major street network improvement projects recommended in the long range transportation plan are considered for inclusion in the CIP. Bozeman lists its five year funding priorities for capital projects in the CIP, which is updated annually. Funding for projects listed in the CIP can come from a variety of sources, but projects funded by transportation impact fees must be included in the CIP.

The Impact Fee Capital Improvement Program (IFCIP) also sets a list of five year funding priority projects, but is limited to projects wholly or partially funded through impact fees. The preliminary list of proposed projects in the CIP and IFCIP are prepared by city staff annually and then submitted to the City Commission for adoption for the ensuing fiscal year.

The City of Bozeman uses a suite of funding sources to improve and expand the transportation system. Besides impact fees, governmental transfers (State Urban Funds), and assessments from Special Improvement District (SID) are available to fund projects in the CIP. The General Fund provides revenue for most major city functions, and has been used in conjunction with other resources to finance local street and highway projects. The gas tax apportionment revenues from State gasoline taxes are transferred to the general fund to reimburse expenditures for construction, reconstruction, repair and maintenance of streets. Development exactions are typically for local road construction or improvements performed by developers as a condition of approval for their development project. Downtown Bozeman is a Tax Increment Financing (TIF) improvement district with funds generated used to finance projects including street and parking improvements.

For instance, a new transit service, Streamline, was started which connects Bozeman to the Big Sky resort area. The establishment of this service was the result of several finance and non-finance tools including transportation district financing, general fund from the City, and interagency coordination.

The impact fee study is a requirement to justify how much a jurisdiction can charge for impact fees. The initial time and resource expenditures to conducting the study can be a barrier for some communities. For example, information for the impact fee study may prove to be difficult and costly for some jurisdictions to gather because data has not been collected. However the same data may also be important for day to day operations of the local transportation system and should be collected whether an impact fee study is being conducted or not.

During development of the impact fee programs, Bozeman changed the name of the street impact fee to transportation impact fee, recognizing that a multimodal approach was needed to solve the mobility needs of Bozeman residents. As long as the restrictions set out in the State codes were met, impact fees should also be utilized for improving bikeways and sidewalks and not only collector and arterial roads. However, transit operations cannot be funded through impact fees.

The City Commission in Bozeman decided that charging impact fees resonated with the community in light of the fiscal component of the program to pay for new infrastructure and services (the user pays principle). The City had explored and exhausted some of the financing tools available (GO bonds) and decided against raising property taxes for everyone to accommodate new growth in the City.

Overall, transportation impact fees and other funding mechanisms have been successfully developed in Bozeman thanks, in part, to a relatively widespread "user pays" perspective in the community. The community started with a small local funding program, made adjustments as conditions warranted, and expanded the funding base as successes were achieved and the pulse of the community changed. It is quite clear that understanding your own community and working within a comfort range is important to successful outcomes.

It is quite common for a jurisdiction to face resistance from the development community when implementing an impact fee program. In Bozeman there was a transition period whereby the percentage of the impact fee charged rose over time. This strategy alleviated some of the sticker shock faced by developers when imposing the new impact fees.

Substantial information, including many background reports and technical studies, are available on the City's website.