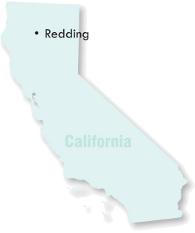 The counties of Shasta and Tehama are located in the northern Sacramento Valley of California, midway between the City of Sacramento and the Oregon state border. The Shasta/Tehama region retains its agrarian and rural roots, but has recently experienced growth pressures from an influx of retirees, second-home buyers and the tourism industry that combined in the recent past to spur new housing and commercial developments. The estimated 2008 population of Shasta County is 182,470 and Tehama County is 62,466; both counties' population has increased about 12 percent since 2000 [1]. The 2030 population is projected to be 260,200 for Shasta County and 93,500 for Tehama County [2]. 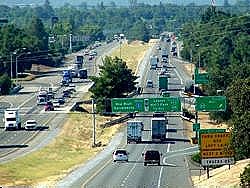 Shasta County's economy has experienced a steady increase in the service and retail trade sector as well as the government segment while the manufacturing sector has declined as an important component of the County's overall economy. During the recent decades of population growth, a significant share of individuals who moved to Shasta County are retired or semi-retired. This factor is important as retirement income tops the list of primary industry earnings for Shasta County at 17.9 percent. A 2003 economic analysis concluded that Shasta County is highly dependent on income from retirees with government entitlements making up 22.9 percent of the County's total income compared to the national average of 13.5 percent [3]. The region's largest city, Redding, is located in Shasta County, as are the municipalities of Anderson and Shasta Lake. 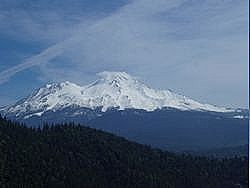 Since 2000, the population of Tehama County has grown an average annual increase of 1.4 percent [4]. Approximately 34 percent of Tehama County's population (21,054) resides in the cities of Corning and Red Bluff. Tehama County's strong agricultural background grew from the fertile valley lands along the Sacramento River and the expansive foothills where grazing activities are prevalent.

Development and growth in the Shasta/Tehama region is due largely to the ability to move people and goods up and down Interstate 5 (I-5). I-5 is the only continuous north-south route through the region, and is therefore a critical link for local, regional, interregional and interstate traffic. Residents rely on I-5 for access to jobs, commerce, and recreation. A recent survey conducted in Shasta and Tehama Counties found that 83 percent of households use I-5 on a weekly basis, with nearly half of households using I-5 on a daily basis. Businesses rely on I-5 for access to goods and customers. 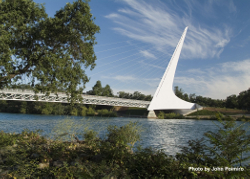 In recent years, I-5 congestion has been growing at a rate of 10 percent per year. However, funding to improve or maintain current traffic conditions has been non-existent, a condition quite common on California's interregional routes. The I-5 system is projected to fail within the next 10 years with stop-and-go traffic in the morning and evening commute hours. Such conditions are currently common during weekends and holidays when large numbers of tourists from Sacramento and the Bay Area pass through the region. This gridlock on I-5 can have negative impacts on both quality of life and the local economy. In spite of worsening conditions, the level of current congestion on I-5 may not be perceived as particularly onerous to residents.

To address looming capacity issues on I-5, the Fix Five Partnership was formed to consider a regional impact fee program to fund improvements to I-5. The primary capacity-enhancing objective of the Partnership is the construction of a third lane of travel in each direction along the project span, with additional projects on regional routes that connect to I-5. 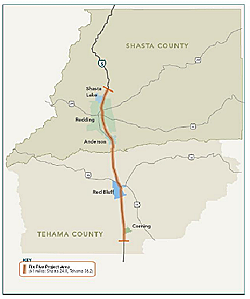 The Fix Five Partnership is an inter-regional joint venture of public agencies in Tehama and Shasta Counties brought together by a common need to study and address the impending deterioration of traffic conditions on I-5. The Partnership was lead by the Metropolitan Planning Organizations (MPO) for the region, the Shasta County Regional Transportation Planning Agency (RTPA) and the Tehama County Transportation Commission (TCTC). Supporting agencies included Caltrans District 2, Federal Highway Administration (FHWA), Shasta County, Tehama County, and the cities of Anderson, Corning, Red Bluff, Redding, and Shasta Lake. The Partnership's efforts have been funded by a grant from the Caltrans State Planning and Research Program.

The Partnership believes a regional approach is best suited to address future conditions on I-5 because the causes and solutions to the problem are regional by nature. Future congestion primarily will be caused by increases in traffic flows associated with new development. Though individual jurisdictions are responsible for the construction and expansion of local transportation infrastructure, no single jurisdiction has the resources to fund meaningful improvements on I-5 by itself. 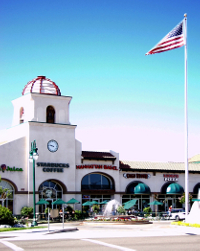 The Partnership studied the need for a proposed regional impact fee program for I-5 and off system improvements in the Fix Five Project Area, a 61-mile stretch of I-5 that runs from just south of the City of Corning in Tehama County to just north of the City of Shasta Lake in Shasta County (Figure 1). In the project area, 36.2 miles are in Tehama County, and 24.8 miles are in Shasta County.

Another justification for a regional impact fee was the response from residents in a survey conducted for the partnership. The 2007 Fix Five voter survey indicated a 3 to 1 preference for an impact fee over other revenue sources to fund I-5 capacity improvements. 54 percent of voters support the County and City governments in adopting an impact fee to fund the expansion of I-5.

Though a regional impact fee could play a critical role in a successful program to fund the required capacity enhancements to I-5, it is only one element that could fund the overall transportation system. The partnership's goals was to establish a fair share funding strategy considering local, regional, state and federal resources and to maximize leverage of state and federal funds by demonstrating a local commitment to I-5 improvements. The Partnership would assist jurisdictions to establish funding mechanisms to meet their fair share responsibilities, such as developing draft transportation impact fee ordinances and/or other revenue tools. 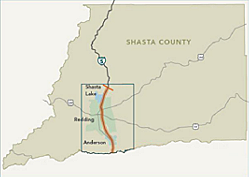 In California, the Mitigation Fee Act passed with Assembly Bill 1600 in 1987 requires that any agency adopting impact fees establish a reasonable nexus between the projected amount of new development, the public improvements needed to serve that development, and the amount of the fees. Both RTPA and TCTC conducted a separate impact fee nexus study to analyze the need for an impact fee program. The Shasta County Regional Improvement Program (SCRIP) Impact Fee Nexus Study also identified additional projects for inclusion in the SCRIP by the local partner agencies. The off-mainline improvements (not on I-5) included interchange expansions, widening of parallel routes, and access to a regional employment center. All additional improvements contributed to the efficient operation of I-5 because they provided either efficient access to the mainline or the development of alternative routes. The nexus studies also estimated the available funding from state and federal sources and the resulting impact fee amounts that would be necessary to fund needed improvements. Both Shasta County and Tehama County completed their Impact Fee Nexus Study in 2009.

The Partnership proposed an Impact Fee Zone which limits the impact fee to new development in those portions of Shasta County and Tehama County that are most dependent on I-5 and that will generate essentially all regional growth (Figures 2 & 3). The Impact Fee Nexus Study determined the current and future congestion on I-5 and supporting facilities through 2030 (Figure 4). 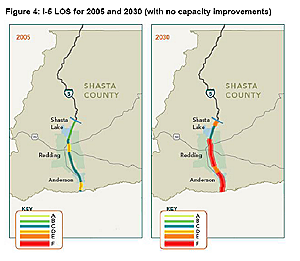 The Partnership understood the importance of outreach to inform and educate the public and elected officials about the need for a regional impact fee. The outreach campaign included polling, stakeholder meetings, and informational and educational media. The outreach included over 30 public meetings during the 3 years of program development. This outreach involved open houses and presentations to local regional planning agencies, city councils, board of supervisors, city managers, county administrative officers of the jurisdictions along I-5 in Shasta and Tehama counties, various service clubs and organizations, and Executive Committee and Technical Advisory Committee meetings. Public participation also included local meetings with chambers of commerce members, realtors, contractors, and developers. 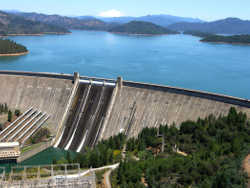 The regional impact fee program has not been implemented even though the 2007 survey indicated public support for impact fees. During public hearings the impact fees received approval in the City of Shasta Lake, but were voted down in the cities of Anderson and Redding. The County of Shasta decided not to consider the program based on the no-votes in two of the cities. Due to the local stipulation for unanimous participation, the impact fees will not be implemented in Shasta County at this time. In Tehama County the impact fee nexus study was accepted by TCTC but has not been considered by any of the jurisdictions. Adoption of the impact fees have been postponed in order to consider a comprehensive study of impact fees for other types of facilities at a later date.

The process of documenting the need for a regional impact fee in the Fix Five area took 3 years to develop. During that time, a number of factors including the recession and changes to the city management and city councils shifted the view for the need of a regional impact fee. Before the recession, each of the jurisdictions in Shasta County had housing projects with over 3,000 dwelling units proposed. Communities felt that a regional impact fee to address I-5 was the best manner to deal with this growth. However in the current economic climate, many development projects have been put on hold and the urgency of addressing future congestion on I-5 has diminished. 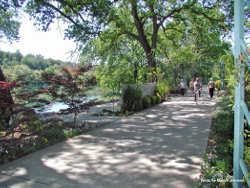 The regional impact fees were opposed by the development community. This group did not see the potential benefits of a regional impact fee program to streamline the environmental review process for new development. Because the impact fees were not adopted, Caltrans will continue its current practice of requiring project-specific impact analyses instead of cumulative impacts when determining the appropriate level of mitigation. Developers will still be required to negotiate on a project by project basis all development related impacts with Caltrans. Outreach to the development community and education about the financial benefits of a streamlined review process could have lessened some opposition during city council hearings about the impact fees.

While the attempt at instituting a regional impact fee program was not successful lessons learned during the process can be taken away and could provide insight for other jurisdictions:

The local jurisdictions in the Shasta/Tehama region felt they could not address the I-5 capacity issues independently. The two MPOs (RTPA and TCTC) were the main drivers pushing for a regional solution to address I-5. Through their modeling and forecast work, the MPOs determined that I-5 would become congested during peak periods within a 15-20 year horizon. The MPOs worked to form the Fix Five Partnership and lead the effort to address future congestion on I-5 through the Impact Fee Nexus Study and justify a regional impact fee program. Though the impact fees have not been adopted, the process for developing a regional impact fee study paves the way for future discussion and has raised the public's awareness of the future congestion on I-5 and alternative financing approaches to address congestion and fund improvements.

[2] State of California, Department of Finance, Population Projections for California and Its Counties 2000-2050, Sacramento, California, July 2007