The City of Charlottesville, Virginia lies amidst rolling hills near the base of the Blue Ridge Mountains. The region's natural beauty, cultural amenities, and rich history are attracting an influx of new residents. As a result, the city and the surrounding five-county region are growing rapidly.

This growth, however, is creating development patterns and congestion that many believe are diminishing the area's unique qualities. Residents have expressed particular concern about a proposed four-lane highway bypass around Charlottesville. Many fear that the highway, proposed as a solution to traffic problems, would encourage sprawl, create more traffic, and blight an historic, rural landscape.

In response to these concerns, the Thomas Jefferson Planning District Commission led a regional visioning process that resulted in the 1998, "Sustainability Accords and a Vision of Sustainability." The accords called for a new direction in regional development patterns and practices. To implement these accords, the Commission undertook an innovative public process and modeling approach resulting in a transportation and land use vision for the Charlottesville metropolitan region.

A new tool known as the CorPlan model fulfilled the first objective. CorPlan is an innovative, geographic information systems-based model that estimates regional land development potential using prototypical "community elements" as building blocks. The CorPlan model was used in the EPI study to allocate future development by type throughout the region, for different land use alternatives. This allocation was then used as input to the region's travel demand model to develop transportation forecasts for each alternative. The community elements were also represented through architectural drawings to show people what future development might look like.

To fulfill the second objective-developing a vision for the region-the Commission undertook an 18-month study that focused public input on three questions:

Public workshops showed a strong preference among residents for a more compact, nodal form of development, and for transportation systems that would support this pattern. The Commission is now moving on to the challenge of implementing the 50-year vision through the revision of local comprehensive plans and capital improvement programs.

To help guide the Eastern Planning Initiative, the Commission created a 35-member Advisory Committee made up of elected officials, business leaders, representatives from environmental and community groups, and study area residents. The committee met nine times and hosted four public workshops during the course of the study. A team of planning consultants and the University of Virginia School of Architecture assisted the Commission with the project.

During the first workshop, participants reviewed the existing community elements and offered suggestions on how to improve livability. In this workshop, participants expressed a strong desire to "enhance" the standard suburban elements which included separate residential, retail, and office components. Enhancement concepts included a community focal point and distinguishable boundaries, greater pedestrian friendliness, a greater mix of activities, better use of open space, and building at a human scale.

In the second workshop, participants were asked to allocate future development within the region using the "community elements." This workshop resulted in a general consensus that growth should be concentrated in the region's core and/or nodes of development, primarily utilizing urban and "enhanced suburban" elements. 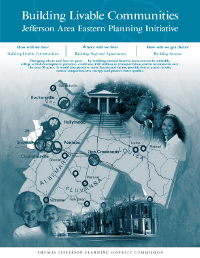 Based on the workshop results, the study team constructed three land use scenarios-a "nodal" and two "core" scenarios - for comparison with a "dispersed" or trend scenario. The study team also constructed transportation scenarios, made up of various patterns of highways, transit, and non-motorized facilities, to support each land use scenario. These scenarios were presented to the public at the third workshop for feedback, and participants were asked to suggest and agree upon transportation and land use goals.

During the remainder of the study, the study team focused on the steps needed to implement the public's expressed desire for some form of the "nodal" or "core" scenarios.

The primary outcome of the EPI study was a set of "key success factors" to support the public's preference for a clustered development pattern. The recommendations identify specific locations for development areas, but leave the question of magnitude of development for localities to refine.

Traffic modeling by the study team using the state's MINUTP model confirmed the benefits of a more compact development pattern. Compared to the dispersed land use/transportation scenario, which included a northern freeway bypass as well as adding lanes to arterial roads, travel demand forecasts for the urban network and compact development showed lower congestion levels. At the same time, the capital investment cost of the urban scenario was estimated at roughly half the cost of the dispersed scenario.

Implementation of the EPI recommendations will largely rely on the initiative of local jurisdictions to revise comprehensive plans and capital improvement programs. Regional highway and transit investment decisions by the MPO and state DOT will also play a significant role.

The Eastern Planning Initiative in Charlottesville provides a number of insights into how planning agencies can assist citizens in developing a transportation and land use vision for a region.

Use "visioning" as a starting point for planning. Planning simply with numbers and words does not give people a sense of what their community will "look" and "feel" like in the future. Visual representations of alternative development patterns and transportation infrastructure provide people with a more thorough understanding of the choices they are making when adopting planning concepts.

Take the long view. Communities were concerned at the outset of the study that recommendations might contradict recently-adopted comprehensive plans. The Commission addressed this concern in part by specifying a 50-year rather than 20-year time horizon. The 50-year timeframe allows jurisdictions time to plan for revisions in the next update of the comprehensive plan, rather than rushing them through this process or (alternatively) maintaining a local plan that directly contradicts the regional plan.

Plan for transit in advance. Study participants realized that fixed-guideway transit was not currently cost-effective for the region, yet they wanted to ensure that it remain a viable option in the future in case the region continued to experience rapid growth. Participants agreed that preserving transit right-of-ways and creating transit-oriented development patterns were strategies that would have minimal costs now but could provide significant payoffs in the future.

Consider fiscal and economic equity impacts. One unanticipated outcome of the study process was a significant concern over the equity impacts of the proposed land use patterns. Participants were concerned about impacts on local government revenue and expenditures as well as on the affordability of housing in the region. A future study will investigate these fiscal and economic impacts in more detail.

The results of the Eastern Planning Initiative represents only the start of a long process, and much implementation work remains. The study, however, clearly demonstrates how creative approaches to modeling and public involvement can help a region plan for its future and maintain the quality of life that its residents value.

Hannah Twaddell, former Assistant Director of the Commission, noted that even in an "involved" community such as Charlottesville, it is "chronically difficult" to engage people in planning. The Commission did have success, however, with a game-playing exercise. In this exercise, each player selected a different alternative future theme for the area. The themes, named after old television shows, represented overarching descriptions of how the region could look and function in the future. Groups of participants then decided what type of land use patterns would maximize their theme and put them on a laminated map.

Local government staff and elected officials were key participants in the EPI. Ms. Twaddell reported that reactions among jurisdictions to the study and its recommendations have been generally favorable, although sometimes mixed. The urban governments appear ready to embrace EPI concepts for use in their long-range planning. Outcomes are likely to include a new urban street network and transit facilities, as well as fewer bypass roads. Local governments in rural areas, in contrast, have been more cautious about embracing study recommendations. The next major step following the EPI study will be a "regional summit" at which local governments are invited to present their reactions to the study. Ms. Twaddell hopes that the governments will form a task force to address success factors and agree on implementation steps.

The Virginia Department of Transportation (VDOT) was also an important participant. According to Ms. Twaddell, VDOT was initially skeptical but later "warmed up" to the project. While reluctant to engage directly in land use policy issues, VDOT did acknowledge the interests of local jurisdictions in developing alternative land use policies that may influence transportation forecasts and investment needs. VDOT's primary concern was that the model system be credible and provide reasonable results. To monitor this, an engineer was involved in the Advisory Committee throughout the project.

With respect to the CorPlan model in particular, at least one and possibly two counties are counting on the model to support future planning. Some staff within the VDOT planning division have also expressed interest in CorPlan as a tool for statewide transportation planning.